VCT LOCK//IN: EVERYTHING YOU NEED TO KNOW

Get ready for an unforgettable showdown as the VALORANT Champions Tour debuts its next chapter with LOCK//IN! Today we're excited to announce the match-ups and schedule for the biggest VALORANT esports tournament of all time. From February 13th to March 4th, 32 of the best teams in the world will battle it out at the Ginásio do Ibirapuera in São Paulo for three weeks of intense competition. If you want to be there in person to witness the action firsthand, you can grab your tickets here. 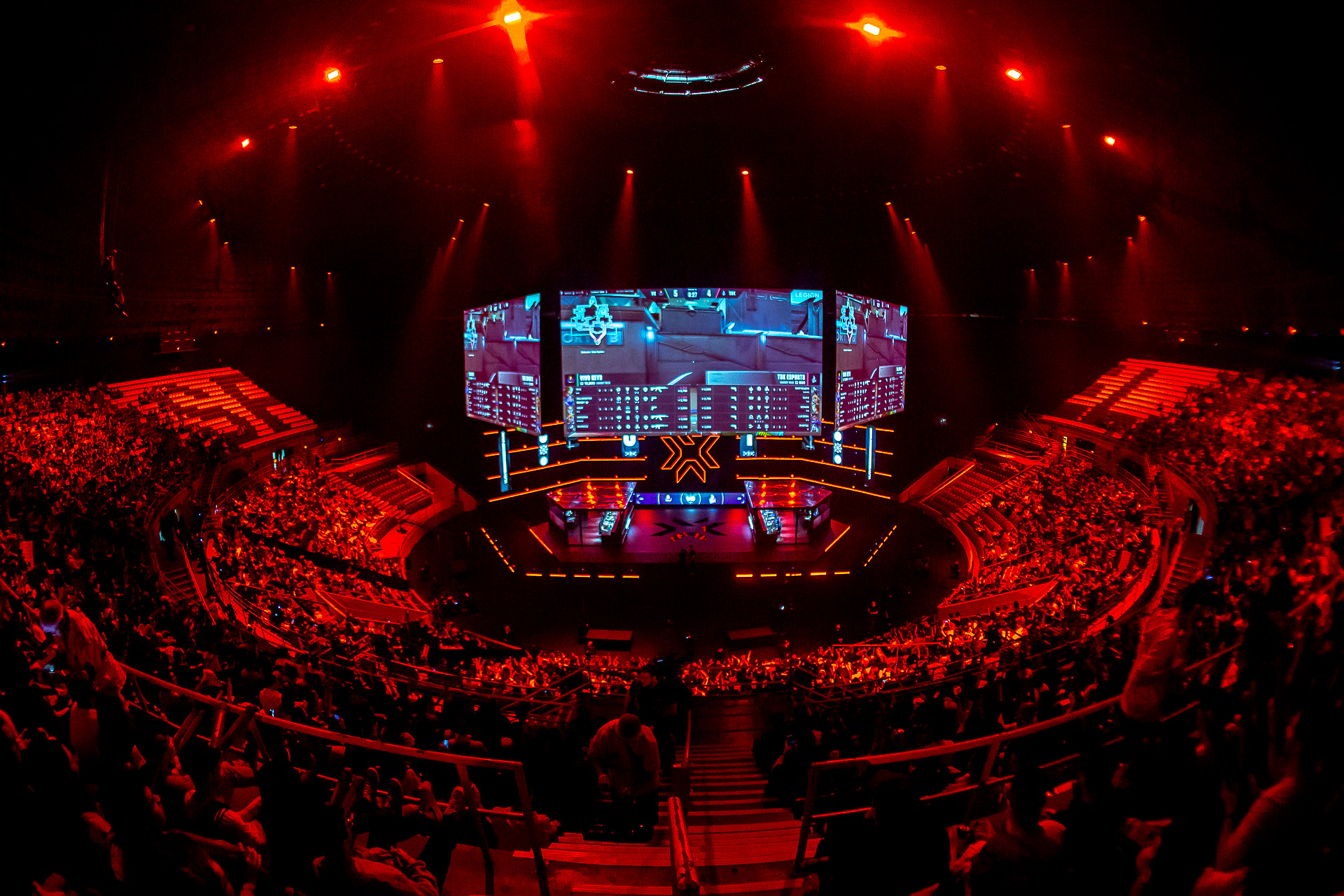 LOCK//IN will see every team from the Americas, Pacific, EMEA leagues as well as two invited representatives from China! The team that secures victory at LOCK//IN will earn their region an extra slot at Masters 2023. 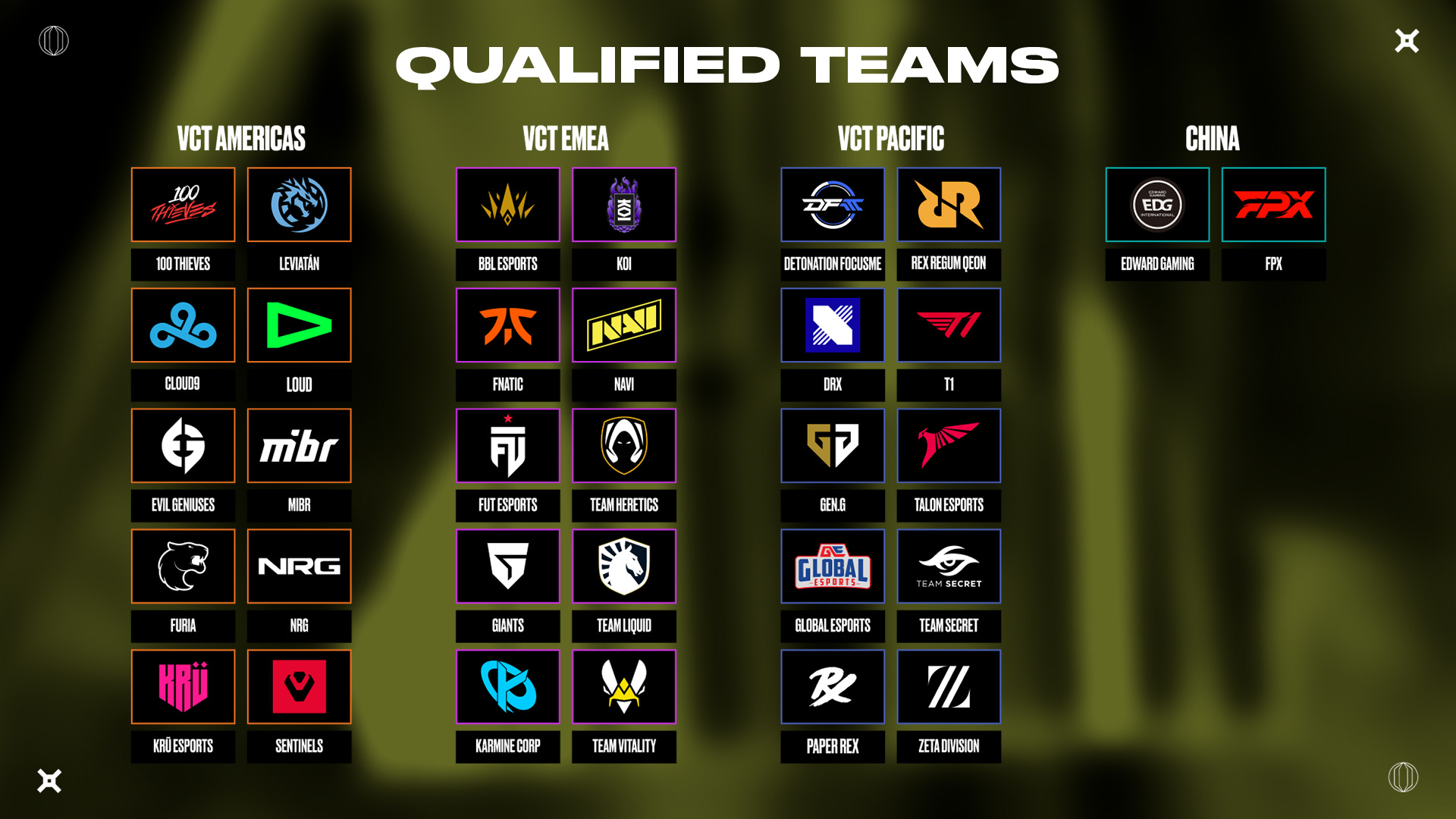 We wanted to kick off the next era of the VALORANT Champions Tour with an epic tournament that brought together the entire VALORANT community. With LOCK//IN our goal is to lay storytelling groundwork for the 2023 season while thrilling fans with high stakes competition. To build the largest tournament in the history of our sport, we had to consider different formats that could accommodate the largest number of teams we've ever had at a single event. After reviewing many options, it became clear that to be as globally inclusive as we wanted, a single elimination format was the direction we needed to take. While we think this is the best way to kick off the 2023 season, we plan to return to a double elimination format for future international events.

From past events, we know that at global tournaments fans want to see matches between teams from different regions. To maximize the number of inter-regional matches at LOCK//IN, we implemented a random draw process that paired teams from different regions in the first round, while also maximizing the possibility of inter-regional matches for the second round.

First, regions were paired into 16 first round match-ups, with each match-up consisting of two team slots.

Each team slot was assigned a random number from 1-10 to account for the 32 teams in attendance. (Americas 1-10, EMEA 1-10, PACIFIC 1-10, China 1-2). In line with our goal to maximize geographically diverse competition, teams from China were paired with team slots from the AMERICAS and EMEA.

Second, the 16 match-ups were distributed across two sides of the single elimination bracket to maximize inter-regional matches for the first two rounds. For this event, the two sides of the bracket will be referenced as Alpha & Omega:

Finally, a random draw assigned each of the 32 teams a number from 1-10 that corresponded to their region and an already placed team slot, giving us our final bracket. 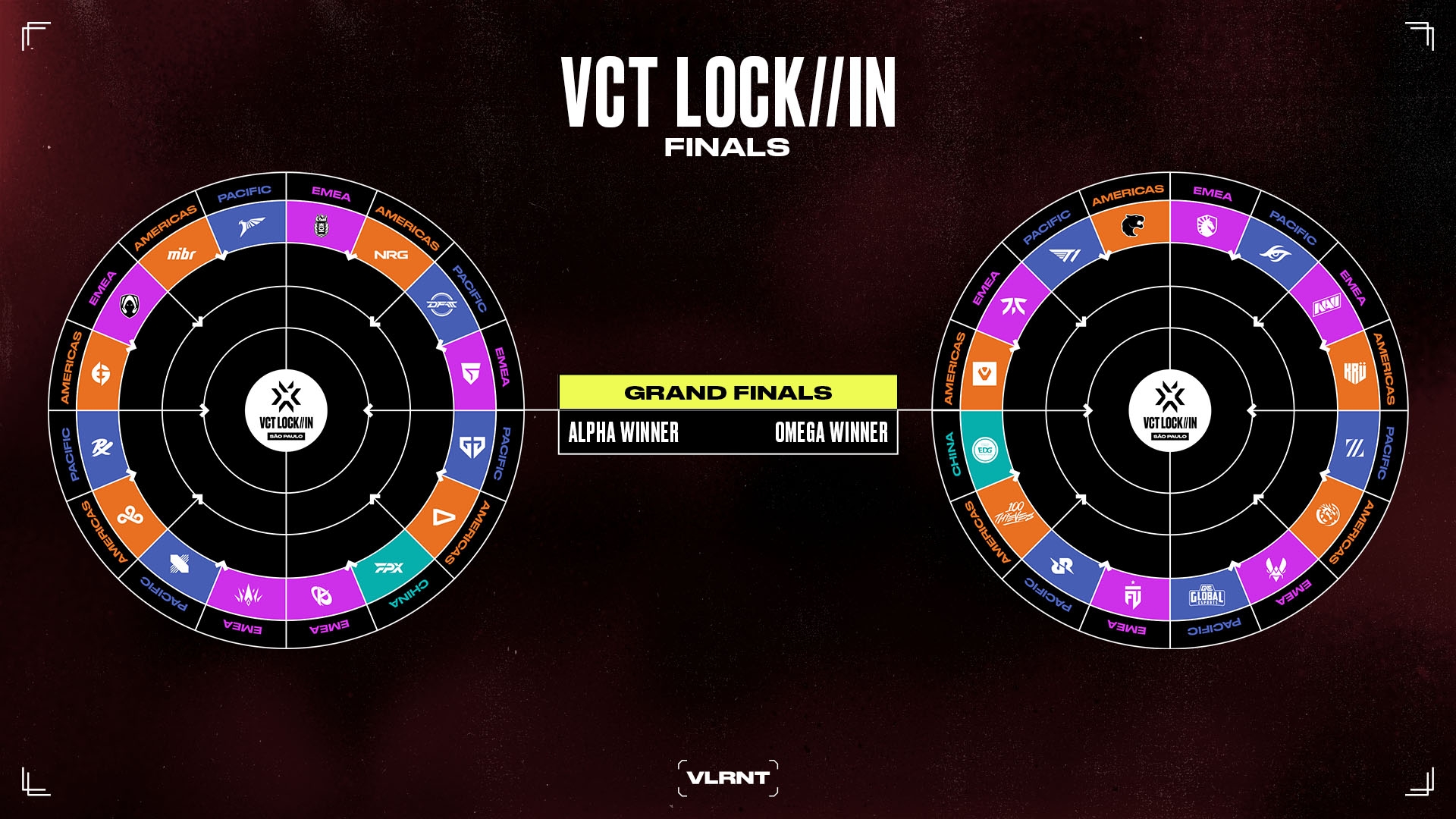 LOCK//IN will consist of three stages of competition: 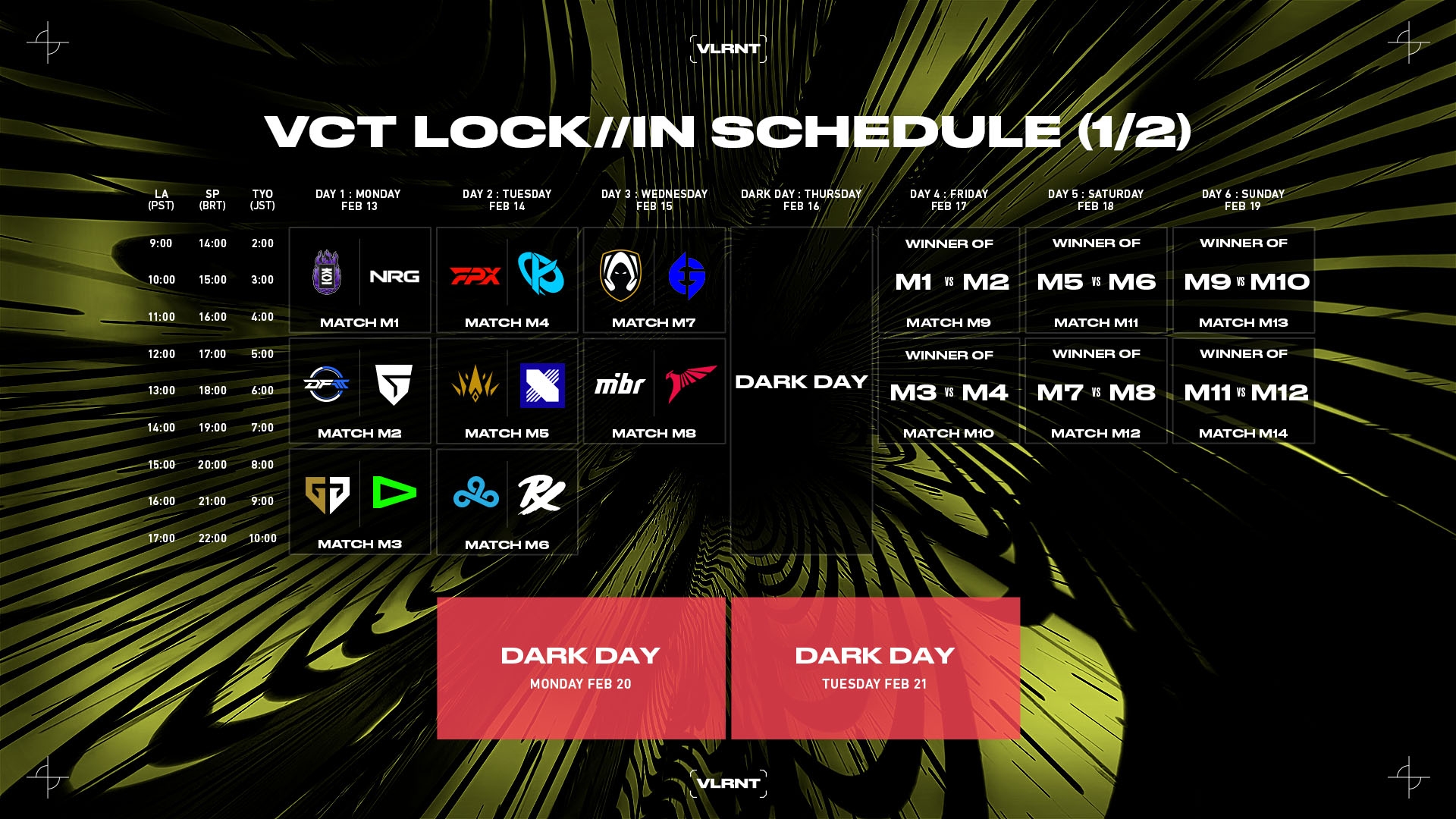 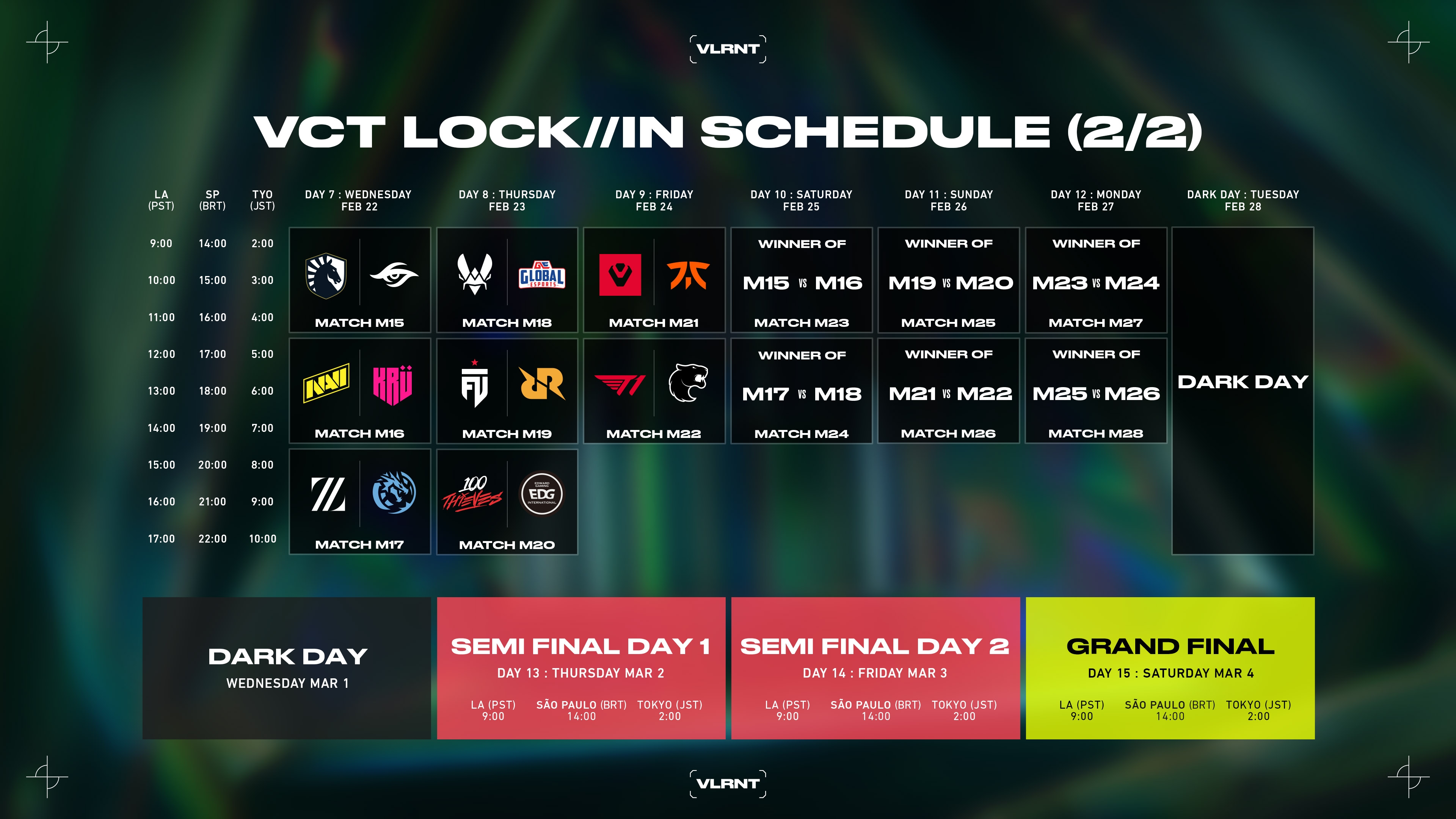 The tournament will be broadcast in many languages and the full list of channels can be found below. Additional information on Drops, Watch Parties, and language specific channels will be shared in the coming weeks.

For additional details about LOCK//IN make sure to follow the official VALORANT Esports social channels: