Domination ushers in the second chapter of The Darkin Saga. In this expansion we are introducing three new champions and the Arclight Event. Will the Arclight forces prove enough to hold back the tide of Corruption? Log in for Domination - playable on October 12th at approximately 11:00AM PT.

Over the past week, we’ve been revealing all of the cards being added in Domination. Head to one of the galleries below to get the full list of new cards and start building your day 1 decks!

"I put the scheme in schematic!"

You may put any Cultist cards into your deck during deckbuilding. Once you have played 3+ Cultist spells, draw a Varus.

‘New’ refers to any card that you have not played yet.

Editor’s Note: ‘New’ isn’t really new- it was introduced in the previous expansion, but it’s expanded upon with the new roster of champions so we’ve prepared a beautiful image to remind everyone how it functions!

New Challenges and Quests have been added to introduce the mechanics being added in Domination. Additional AI decks featuring cards added in the expansion have also been added to the Vs. AI opponent pool.

“Only the worthiest of mortals can hope to become vessels for the divine Arclight.”

Ancient evils have awoken across all of Runeterra, hope dims as corruption erodes our final bastion of hope. In our hour of need, the divine Arclight has come to battle back the darkness! In the Arclight event we will be able to get our hands on all new Icons, Cards, Emotes, and new Champion Skins.

This pass, and future Event Passes, also come with many free nodes, so you’ll be able to earn rewards as you play whether you choose to purchase the Premium Event Pass or not. It should still take roughly the same amount of time and effort to complete this pass as previous Event Passes.

Purchase before October 26 to get an exclusive quest that awards 10 Arclight Sigils and a Rare Prismatic Chest! The event pass grants access to an upgraded event path with premium rewards and immediately unlocks Arclight Vayne. All unlockable rewards can be viewed on the Event rewards road.

The following personalization items are available with this patch.

"What was that all about?"

New Ranked Icons for the Awakening Season will be rewarded.

Channel the immortal agents of the Arclight.

*Price is prorated for potential duplicates.

A once-in-a-millennium opportunity to empower the Darkin Bow and harness the Arclight with Varus and Seraphine.

* Price is prorated for potential duplicates.

It’s that time of year already. Show your spirit and get ready for Worlds 2022 by heading over to the shop to collect this free Icon and Cardback.

“Witness the clash of giants in the 2022 World Championships.” 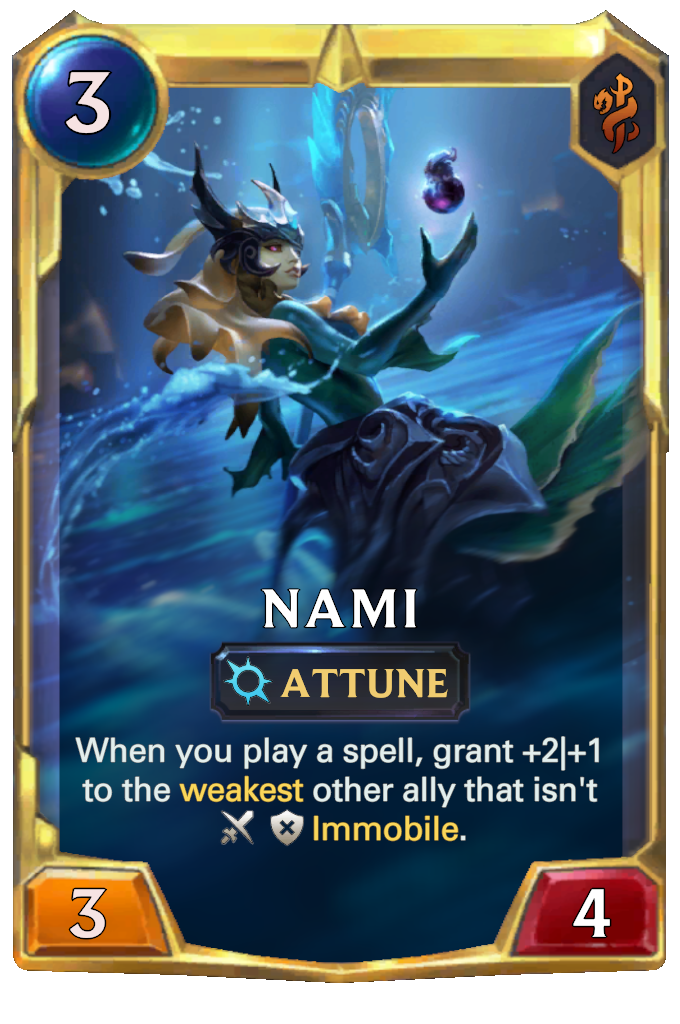 Old: When you play a spell, grant +2|+1 to the Weakest other ally that isn't Immobile.

New: When you play a spell, grant +2|+0 to the Weakest other ally that isn't Immobile.

Nami really found her footing in this last patch, especially at higher levels of play. Although she wanted to be part of our world, we wanted to make sure her power is focused on drowning her opponents out rather than weathering the storm.

Editor's Note: We want landmark removal to be able to fulfill its role of countering landmark centered strategies, and having this effect trigger when an opponent blows them up made trying to remove landmarks ineffective and reduced opportunities for counter play. This adjustment has been live since patch 3.16.