The North American TFT esports team is excited to announce that we’re teaming up with Wisdom Gaming again for Monsters Attack! Wisdom will handle all broadcast production and tournament organization as we fight our way through an action-packed set of virtuous heroes and menacing villains to crown the best TFT players in North America.

Wisdom has already updated riot.com/natftesports for the new set—head there throughout Monsters Attack! for info on format updates, upcoming events, standings, rules, and official ladder snapshots. 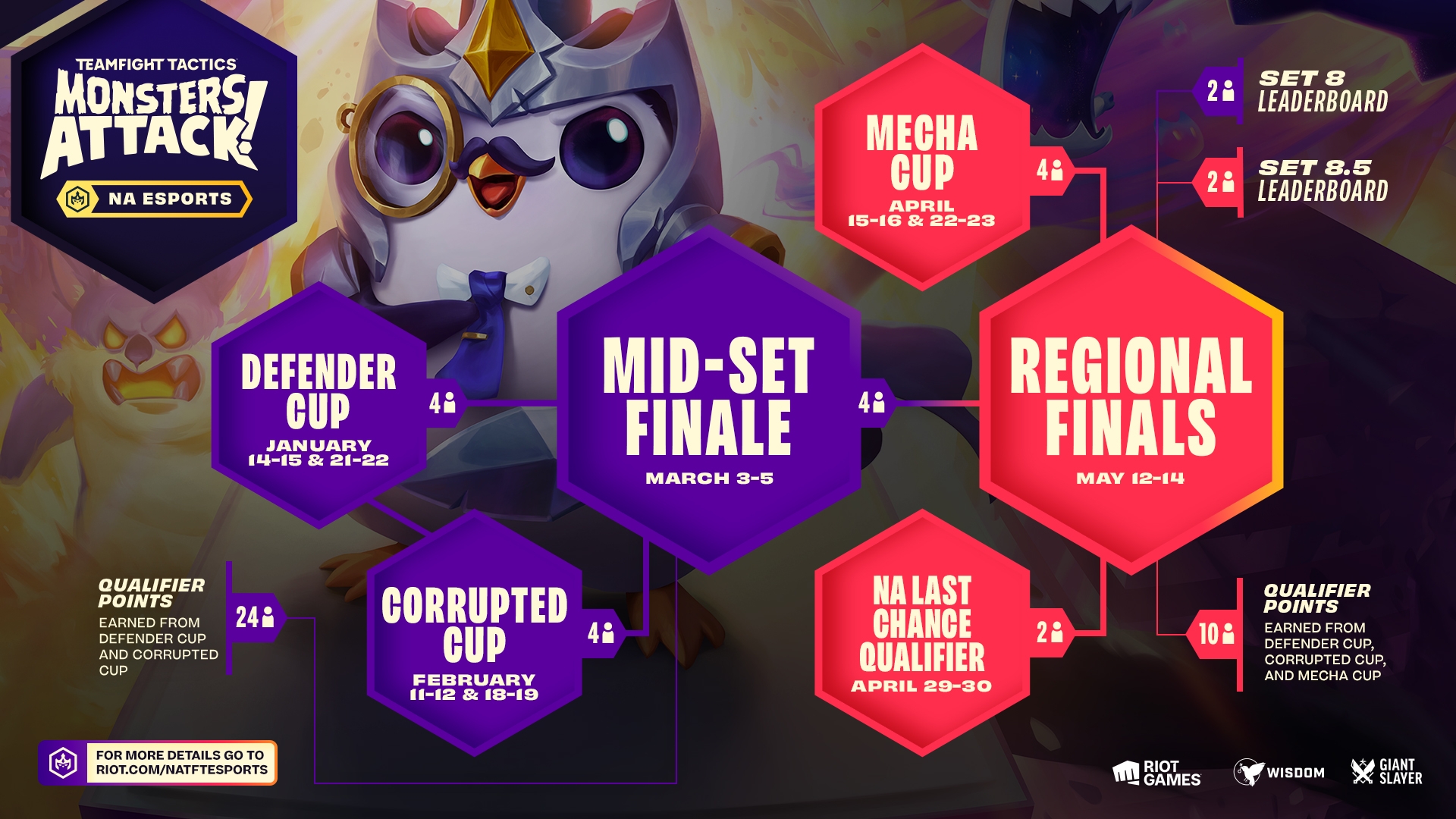 Our events throughout this set will qualify the best NA representatives for the Monsters Attack! Championship. Keep reading for an overview of upcoming events and format updates, while full details can be found at riot.com/natftesports

The Defender Cup and the Corrupted Cup will kick off the competitive scene this winter. Each Cup will be a four-day, two-weekend event with the top 160 ranked sign-ups receiving an invite. 128 of the 160 players will participate in play-ins on Day 1. The top 64 players from Day 1 will move onto Day 2 of play-ins. The top 32 sign-ups will automatically qualify for Day 3 where they’ll be joined by the remaining 32 players from play-ins.

The top 4 players from each Cup will qualify for the Monsters Attack! Mid-Set Finale. Every participating player will also have the chance to earn Qualifier Points based on their final placement.

Next, NA’s best players show off their skills and superpowers at the Monsters Attack! Mid-Set Finale. Over three days of gameplay, this event will feature the top 4 players from both the Defender Cup and the Corrupted Cup as well as the top 24 players from Qualifier Points.

The Mecha Cup will be our first NA competitive event after the mid-set update, and will follow the same format as the first two cups: two days of play-ins followed by semifinals and finals the next weekend.

The top 4 players from the Mecha Cup will directly qualify to the Monsters Attack! NA Regional Finals. Players will receive Qualifier Points based on their final placement.

At the North American Last Chance Qualifier, invited players will have one last shot at qualifying for the Monsters Attack! NA Regional Finals. Invites will be extended to the top 16 player sign-ups based on a leaderboard snapshot.

The top 2 players from this event will qualify for the NA Regional Finals.

Our final event for the North American competitive scene will determine who represents NA at the Monsters Attack! Championship.

The number of top players who will qualify for the Monsters Attack! Championship or the Western Last Chance Qualifier will be announced at a later date. The player with the highest average placement across the entire event will also receive a spot at the Championship.

If you thought Rammus finally being added to TFT was a momentous occasion, we’ve got more exciting news—the total prize pool across the NA Monsters Attack! competitive series is now $100,000!

Here’s a breakdown of the prizing:

Finally, leaderboard snapshots are once again returning to reward players who consistently maintain a high rank on the TFT leaderboard.

To be eligible, players must have at least 10 ranked games on the same account each week a snapshot is taken.

That’s it for our Monsters Attack! NA competitive overview, but make sure you bookmark riot.com/natftesports and follow TFT and Giant Slayer on social media. We’ll be sharing more info on upcoming Monsters Attack! events, standings, rules, and official leaderboard snapshots. We hope to see you either competing or cheering on your favorite players when we kick things off with the Defender Cup in January!